by hamza in Customizable, Strategy 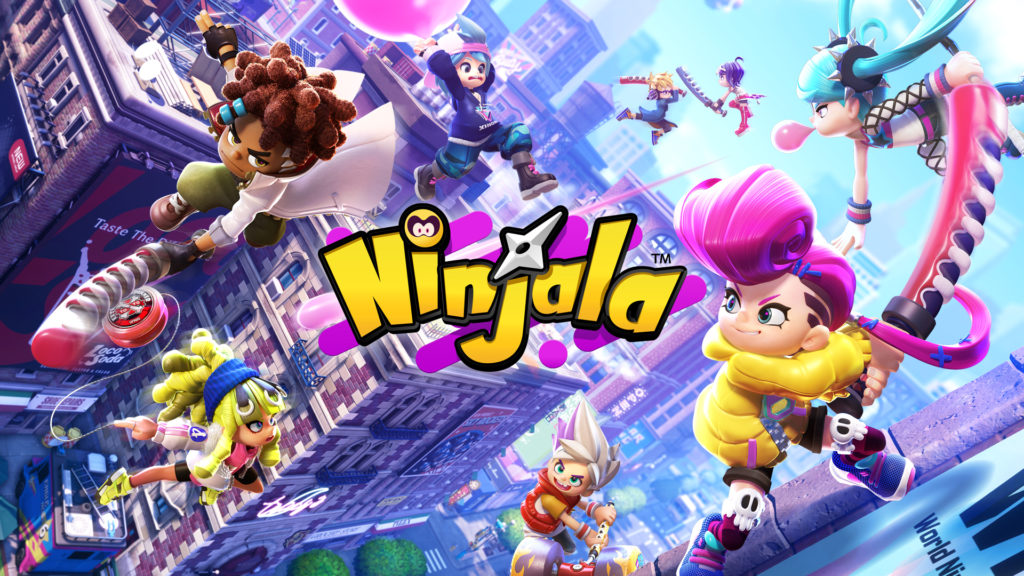 The Nintendo Switch is sorely lacking in multiplayer competitive games. In addition to Splatoon 2, Overwatch, Fortnite and Tetris 99, there is nothing to remember (except Super Smash Bros. Ultimate with its nightmarish online), but all of them over the years could already get bored, and something new developers are not in a hurry to offer. Apparently, this is why the console audience followed Ninjala with such interest – it looks like Splatoon 2 with its bright effects and fast matches, but in fact there is little in common between these projects. And although at this stage the game is more like a skeleton, which in the future will grow content, it is difficult to break away from it now. If you understand, of course.

Ninjala is distributed under a shareware model. This is an arena action game where eight players face off in a match. There is a mode in which everyone acts for themselves (for some reason it is called “Royal battle”, although no one is eliminated after death), and there is a team battle with two squads of four people. All participants have melee weapons and they can fight with each other using a variety of strokes and techniques. For many actions, points are awarded – the one who scored most wins. In other words, it is not necessary to kill as many opponents as possible, but at the end of the match you get an impressive bonus that will help you get to the top row in the final table. It is important to deal damage to your opponents, as well as smash drones – they will not only improve statistics, but also give you more opportunities in battle.

The main problem with Ninjala, which may cause some users who download It to lose interest – is the lack of proper training. This is not Tetris 99, where they did not explain anything at all, but here the developers limited themselves to basic things that you can guess yourself. Hit this button, make a dash – this, there is a double jump, there is a run on the walls… As a result, you get into a multiplayer match and see something quite different from what you were told in the short “guide”. For example, there is no mention of different types of strikes depending on which way the joystick is deflected.there are normal attacks, teleportation behind the opponent’s back, and throwing him into the air. And when you fight with an opponent and suddenly you both hang in the air, after which some colored arrows appear on the screen, you generally come to a loss. You decide to go back to training, click on pause, and after a few more clicks, you find several slides describing these elements.

In Ninjala, in case when two participants attack each other with the same techniques, “Rock, paper, scissors” system is used to determinate win – they must tilt the left controller in the selected direction. If you tilt it up and the opponent decides to go down, you will win the duel and deal damage to it. If you choose to the left, and the opponent is down, then he will start to beat you. Now you often find yourself in such situations accurately because everyone attacks each other with the same attacks, but those who understand the mechanics have to rely on “random” less often. By the way, I advise you to move the joystick left or right – it is very rarely tilted down.

Another element, the explanation of which has sunk somewhere deep in the menu, is related to drones – large objects that appear a few seconds after the start of the match. They are red in normal mode, green in command mode. Standard drones when destroyed not only give the player points, but also increase his energy scale by one division. Drones with umbrellas increase it by two and require a little more blows to destroy them. The energy itself is necessary for various actions: to jump to the side (to get closer to the opponent or fly away from him), to accelerate (three cells are used) and to create a powerful weapon based on the existing one – as soon as there are eight cells, you can increase your strength until the end of the round. Such weapons are most useful when “Rock, paper, scissors” mode is activated. In a normal situation, the tilt of the joystick in the same direction forces participants to re-select the direction, but with a powerful weapon, it does not matter – if the same are selected, the owner of the big power still wins.

Why all this is not explained in the game itself, although even during beta testing, users had questions, is not entirely clear. The more you understand the combat system, the more exciting it is to participate in matches. You can roughly understand when it’s best to use a shield (in Splatoon, everything is related to paint, here-with gum, so that the role of the shield is inflated chewing gum), how to break through the opponent’s defense, when it’s better to join the fight. Since we play as a ninja, we can transform into various objects (from garbage cans to air conditioners) and wait for unsuspecting enemies near the drones to deliver the last blow and take all the points for ourselves.

You can choose from 12 types of weapons, which can be divided into three categories: fast, normal and slow. They differ not only in their appearance, but also in the techniques they perform, as well as the “ults” (the maximum capabilities of each weapon) that accumulate during the match. When you click X, the character either turns into a hurricane and within a couple of seconds causes a lot of damage to hurt opponents, or releases a powerful beam, or otherwise almost provides itself with points for one or two killer blows.

It is a pity that there are very few maps – only two. And they are very different from each other: one resembles an arena, the other is a small area with high buildings. Obviously, it is much more difficult to find enemies on the second map than on the first – it seems good that each location requires a special tactic, but on the other hand, the difference in size and verticality is too great.

Unfortunately, there is no difference between the characters – whatever appearance you choose, they will do the same thing, only their equipment is important. The creators of any shareware game have to make money somehow, and in Ninjala, fortunately, almost all microtransactions are related to cosmetic items. From the first day, a battle pass is available with rewards for each level: including costumes, masks, hats and morals at the beginning and end of the match, all sorts of graffiti, and so on. For completing a level, you get the same amount that you paid for it, so you won’t have to spend money again next season. I liked the game enough to want to immediately buy a pass, but those who want to play for free without gifts will not stand out– they will be handed a couple of morals, a mask and 200 coins, that is, after five seasons, they will be able to save up for the paid version.

You can only consider “pay4win” medals from the pass, which are used to buy cards with bonus passive abilities and cells for them. One card activates vampirism when hitting, the other increases the amount of energy at the beginning of the match, the third allows you to see the drones through the walls when approaching them. The cards themselves are cheap, but the cells are more expensive, and although the free pass often gets medals, the paid pass has more of them – its customers will get any items faster than the others. But I would not call these “passives” too important – if you barely understand the moves, they will not help in any way.

The main drawback of the monetization system is the one-time coloring options for weapons. They fall out after matches, you do not experience a shortage in them, but they also added lootboxes with a ton of different wrappers, and they ask for real money for this. Of course, no one warns about a limited number of uses, so ignorant users can spend money on what will be taken away from them after the first match. Now players are predictably unhappy with this state of events– because of this, you do not want to use skins at all. It would be better if the coloring pages were endless, but very rare – for example, you would add them to the same battle pass.

The eShop also sells a story campaign, or rather, its first Chapter. It consists of five missions and takes about an hour to complete. In such a short time, the story of one of the characters and his mentor fighting space ninjas is told. The plot is served with the help of comics and is not particularly interesting, and the mission is difficult to call exciting – just fights with not the smartest opponents. It would be great if at least here explained in more detail the main features of multiplayer, but in addition to running on the walls and turning into boxes, you do not need to do anything here. But the final boss is not bad. But for the sake of it, I do not recommend spending your money – I bought this DLC at a discount, and it became a pity.

The main mode-multiplayer is available absolutely for free and does not require any attachments (even a subscription to the online service Nintendo is not required). Content in Ninjala, frankly, is not too much – just two maps and two modes. But there is a rating mode; however, to get access to the leaderboard, you have to dig through the menu.

It would be good if they explained in more detail how to play correctly and how to act in certain situations. This is me who was careful and went to search the Internet for advice from those who are faster than me in everything figured out, and some people will be confused at the sight of “Rock, paper, scissors” and go back to Splatoon 2, without giving the game a chance. The potential of Ninjala is there, it looks great, it is fun to play, and the combat pass allows you to get a lot of all sorts of items with minimal investment. But when you come up with so many variations, you need to help users understand them – they will keep the game alive.

Positive: a bright visual style; a combat system deep enough for this type of game; a fun gameplay that becomes even more exciting when you understand the mechanics better; a dozen unique weapons; a combat pass for those who want cosmetic items, but do not want to pay much.

Cons: training poorly explains the combat system, ignoring its most important elements; not enough maps and modes; one-time coloring for weapons look strange; paid single mode is not worth the money.